Unto this world a new child is born…

Into a culture stricken with madness

That is strained by infinite sadness

The baby cries out loud when it is torn

From its mother’s womb of blackness

Out of its protection and comfort

The child shrieks at the sudden rejection

Removed, the child suffers in discomfort

With handed down beliefs over time

All innocence stripped, a vile crime

All purity is lost with childhood

Preparing the stage for manhood

Opening only the designated gates

Failing to see or honor brotherhood

Believing all things are possible

Stepping on and over others

Through faith nothing is impossible

Desperate for acceptance he suffers

Distraught with grief he makes a confession

That defies the righteous path selected

Seeking his truth while preserving respect 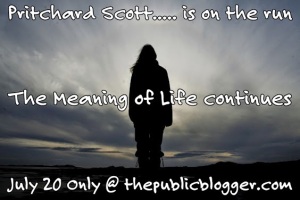 As part of a collaborative effort, I wrote this piece for the infamous Kendall Pearson, and it was featured as the prologue in “The Meaning of Life,” Part I on July 13, 2014, and can be found at ThePublicBlogger.com The saga continues with Part II releasing on July 20, 2014.

“I’m just a girl in the world…that’s all you’ll let me be...” Southern California Native who gets in trouble for sarcasm, suffers from bouts of OCD, and listens to an eclectic range of music really, really loud especially while driving too fast. Turn up the Rap, R&B, Punk, Billy, Indie, Alternative, Classic, Folk, Metal, and Grunge, Melodic, Industrial, Electronic, Soul and so on you get the point. View more posts

13 thoughts on “Unto this world a new child is born…”

I love to hear from you, so drop me a line here - Thanks! Cancel reply